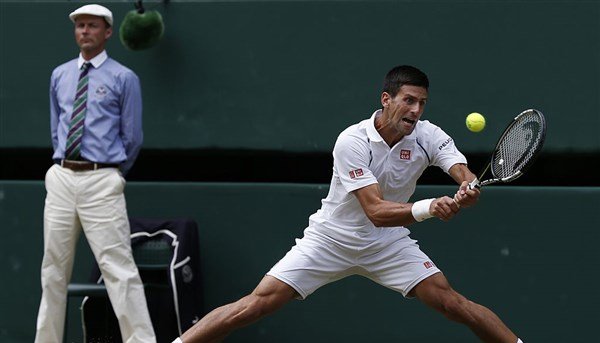 Reigning champion and number 1 seed Novak Djokovic does not have a particularly good draw but the question remains does it even matter? Accomplished grass courters like Kohlschreiber, Raonic & Federer all stand in his way en-route to the final and we could also throw Anderson into the mix as well but his season has been plagued by injury and for me he is not the same player who led Djokovic by two sets to love at Wimbledon in 2015. All in all I can see Djokovic having some tough battles to contend with, especially in the second week, as he makes his way to the final and he will undoubtedly waste some energy in negotiating these, this will aid Murray in the bottom section and for me I can’t see Djokovic winning Wimbledon but he should make the semi- finals at the very least.

Federer headlines this section and the draw has been kind to the old man as it gives him some very easy matches in the first week where he can warm to the task in hand so he should reach the quarters at least, all the seeds look weak to me in this section and there seems to be plenty of room for an upset or two along the way especially in the bottom half where we have a perennially unfit Nishikori, an unreliable Cilic & a grass hating Monfils. So taking all that into account I can see Muller making the quarters from the bottom of this section and at a current price of 1000 I’ve had a nibble as it’s not a totally unrealistic scenario.

This section for me is wide open with Wawrinka, Thiem, Berdych, Tomic, and Zverev the seeds, but it’s not beyond the realms of possibility each and every one of them could be upset early on in the tournament. The un-seeded danger players in this section include Florian Mayer, Verdasco and Del Potro who are all dangerous on this surface. Which one will come through to the semis is anyone’s guess but Zverev or Del Potro could surprise some people with a deep run into week two.

Andy Murray has a peach of a draw with his only tough match potentially against Kyrgios in the 4th round, the other high seeds are Gasquet & Tsonga, the former seems to always do well at Wimbledon but the latter has injury doubts. The danger in this section is Isner who has the weapons to do well here and has a decent chance of making the quarters. All in all I expect Murray to come through and make a strong challenge for his second Wimbledon title.

As regards the WTA I wrote a preview and scrapped it as I just can’t put money down on Lisicki (she has a great draw and loves Wimbledon), but she is completely unreliable at best, and I just cannot advise anyone to bet real money on her as she could quite easily implode in the 1st round or make the final.

Venus has a great draw as well, but she’s always strapped up and the question remains will her body take the rigours of a slam? Then there is Radwanska who has a tricky opening match then an easy looking draw, so I’ve backed her at 26.0

Let’s take a look at the betting/trading trends over the last 4 seasons at the ATP Wimbledon Grand Slam tournament.

Nothing really stands out in this tournament apart from laying the favourite in the 2nd round which has produced a profit in each of the last 4 years, resulting in an 11.54 point profit from risking 52.76 points. This equates to a 21.87% Return on Investment.

This article appeared originally on tradeontennis.com

Author of Mastering Betfair and Football Betting expert for customers of the Trade on Sports service. Freelance football betting writer & Podcaster for Matchbook.com Co-Developer of the football betting software BetformPro. Editor & Podcaster of the Weekly insider Magazine Also developer of betting systems using independent ratings and odds for MLB & NHL Interested in Joint Venture opportunities in any of the above.